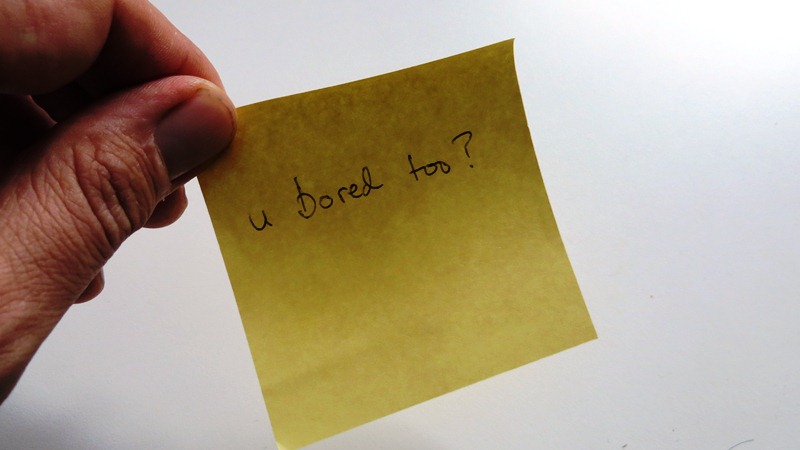 I have observed a couple of behaviours around Instant Messaging (IM) in meetings: the first is IM being used to contact people not in the meeting, either to ask for information pertinent to the meeting, are being asked a question or just to chat about something unrelated because they are bored; the second behaviour is to use IM internally in the meeting where one sub-group will be making comments whilst another is talking. But which of these is more typical and why is this useful to know?

To understand what I’m talking about take a look at this example:

Here we represent four people in a meeting (inside the ellipse) and two people outside the meeting. Lines between the people indicate that they have shared one or more IMs during the meeting. The first chart, below, shows the average number of people involved in IM conversations  for meeting sizes between 2 and 17 people; the sample is about 2000 meetings over 3 months; there are very few meetings with more than 17 people so these are excluded:

Not unexpectedly as meetings get larger there are a few more people using IM in meetings. The ratio of internal to external IMs looks fairly constant though, but this is best observed with another chart:

The ratio is indeed fairly constant at nearly 50:50.

Which, interestingly, shows IMs dropping off on a per-person basis, as the meetings get larger. Is this an indicator of cultural behaviour or is it simply that IM often gets used to tell people the conference call isn’t working / lost the PIN / the phone is broken / can’t use the computer etc.? To answer this would require some analysis of message content, which is possible, but not in the scope of this study. [Complete aside: talking about conference calls check this out]

So why bother? Well most organisations have a bunch of cultural objectives along the lines of “let’s be nice to each other” and, if some further analysis of IMs inside meetings shows that they do not reflect this aspiration, then you can measure your actual culture and observe the trend to see if your cultural change initiatives are working or not.

Some time ago I wrote about examining the numbers of Emails sent during meetings and concluded by saying “looking at instant message traffic during meetings would be more revealing” . I now have some IM traffic to compare.

Before continuing I would like to emphasise that all this data is anonymous and I do not believe it should be examined in any other way because humans are more complex than any analysis of this nature can reveal, it is only useful to find biases for a particular behaviour in a particular situation or identify trends.

Because I do not have IM data for the same period that my original post relates to I have first re-created the email analysis but restricted it to meetings with all-internal attendees because the IM system is only available employees of the organisation:

This is similar to the previous analysis with the exception of less emails being seen from smaller meetings. This could be due to some major changes in the organisation but I’m not investigating that now.

And now the IMs:

Well not the result  I expected but this is what the data tells us: no obvious pattern to IM use compared to meeting size. I’m curious if there might be something buried in here, for example is it always the same people using IM in meetings, are they all in the meeting or are they in communication with people not in the meeting; does this ratio change with meeting size?

In the organisation I’ve been studying I’ve previously described that Instant Messaging (IM) makes a small contribution to the overall understanding of the organisational/social network but this did not tell us if there was anything to learn about when people communicate. To examine this I’ve summarised IMs and emails sent by day, day of week and hour:

The following chart shows daily activity over a two month period. Note that the dip in emails around 20/07/2013 is due to a number of missing Exchange Server log files.

It can be observed that email is more popular and that the pattern of email and IMs is fairly regular when viewed at this scale. The only slightly unexpected observation is that IMs are more popular mid-week whereas email is more mixed.

The next question is does time-of-day make a difference?

You can see some interesting differences emerging, but to make in clearer I have produced a chart showing the percentages of each communication mechanism:

Here you can see some clear trends: IMs are more likely to be made when people are first starting work (in the morning 07:00-09:00 and after lunch 13:00-14:00) whereas email dominates the end of the working day (16:00 onwards). Without further study it can only be speculation as to why this is but my theory is that IMs are used more informally and people who are socially close are exchanging greetings whereas Email is more formal and is used to evidence a day’s work complete.

And what about Wednesdays how does that look when we turn the actual numbers into percentages?

Well, yes, definitely Wednesday is the most popular day for IMs. I can offer absolutely no theory as-to why this is and I’d welcome any suggestions.

Making the most of available data within an organisation needs to balance the effort of obtaining and analysing the information against the value derived from that information. I’ve been looking to see if IM data is worth collecting when an organisation has already collected email data. The following graphic shows social networks based on Email, IM and then combined data, each colour represents a department in the organisation being studied:

Visually the following can be observed:

But what do the numbers look like? The following graph metrics were calculated using Gephi:

Adding in the IM data has increased Average Degree from 71.6 to 74.2 and Graph Density from 0.054 to 0.056; this shows that it has identified relationships that email did not and, therefore, does enhance the pure email graph.

If using the graph to identify the strength of relationships or influence the next question is what weight to assign to IMs compared to email? My initial thought was that an IM contains much less than an email so would be worth an order of one-tenth of an email. However measuring the average degree of IMs (16) it seems that people are more reserved in who they communicate with using IMs and, presumably, have a closer relationship. Therefore I have equated one IM message with one email message.

Any organisation that wants to understand the human interactions that drive the organisation will want to use all available data that adds value. The question is it worth the effort of collecting and including Instant Message (IM) data as well as email. I previously looked at an organisation from a departmental level where it could be seen that Email and IM interactions were consistent and adding IM data did not provide additional insight. Starting to look more at individuals the question is does IM data add additional information of value? My starting point is to plot the volume of Email sent by an individual (to recipients internal to the organisation) against the volume of IMs they initiated (again limited to internal parties). The data is also broken down by departments; I’ve included four fom my previous examination of department-level internal and external interactions:

Visually this plot shows there is very little correlation between the volume of Email and the volume of IMs a person in the organisation generates. There are quite a few people in the organisation who do not use the internal IM system and these are clustered on the x-axis; this study is not exploring why this is but it is probably related to the relative newness of IM within the organisation. The departments do not appear to differ significantly in the distributions although Shared Function A does tend to prefer IM more than the other departments do. In my opinion this plot reveals that it is worth continuing to look at the value of IM data.

One of the shared service departments, highlighted, spends more time communicating
internally than would be expected looking at the above chart. I can’t say which
department this is but will say that I’m surprised as to which one it is.
Identifying these deviancies (which could be positive or negative depending on
how well the deviant department is performing) allow the organisation to
identify areas for further investigation in order to improve.

Email has long been studied to understand Social Networks. In more recent years organisations have embraced internal Instant Messaging, such as Microsoft Lync. Any organisation that wants to understand the Social Networks, and other insights communication data might reveal, will want to know if analysis of Instant Messaging logs can enhance insight from other sources like Email. Depending on an organisations culture Email and Instant Messaging (IM) may represent different levels of trust or formality; revealing a cultural meaning of Email versus IM is beyond this discussion but anyone who has spent a reasonable amount of time in an organisation will probably be aware of that organisation’s cultural tendencies in communications.

My initial question is does IM show us anything Email does not? Starting at a macro view I revisited the inter-departmental communications: there was not much difference when looking at the IM traffic versus the Email traffic (when viewed as percentages of overall traffic) but there did seem to be some potentially significant differences in the volumes of communications internal to a department (I did not previously examine these numbers).

To further explore differences between IM and Email, at a macro level, I have looked at the percentage of internal departmental communication compared to total communication emanation from the department. Here is a chart of the results:

As an aside, the above graph does seem somewhat inconsistent in the function between department size and the percentage of communication that is internal. Looking at the purpose of each department they can be categorised as either ‘Product’ (focussed on selling and servicing a product line) or ‘Shared’ (e.g. HR, Accounts) and these seem to fall neatly into those with an internal communications level below 70% (Shared) and above 80% (Product); here is a table of the data:

As this is leaving my discussion of differences between Email and IM (this shows very little) I’ll explain more in another post.