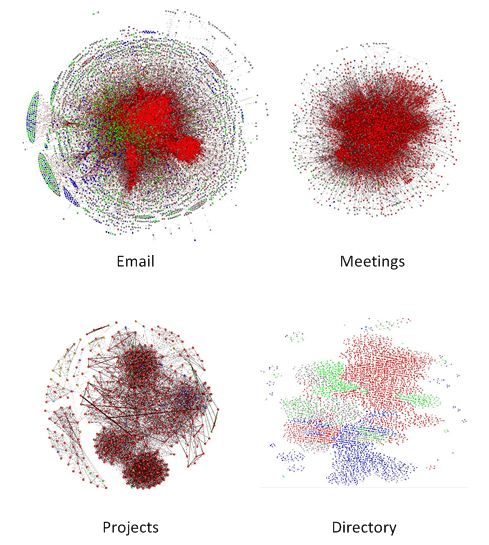 In the above diagram red nodes are from the division of the organisation under study; green and blue are from two other divisions and grey nodes are uncategorised or central functions.

I’ve previously described determining a ‘score’ for social connections taking data from email, meetings, directory and timesheets. The question is how to combine them to produce as complete a picture as possible from the data at hand. I’m fairly sure the best answer is not to simply add the scores together but I’ve not found any guidance that would help do anything except that so that’s exactly what I have done…add them up. To summarise the score (or more correctly weight) given to each edge is made from:

I’ve pulled this data together over the following periods:

The coverage of the data also varies:

Some Observations using this approach:

Despite the rather simplistic approach the results appear to work quite well but I’d love to hear from anyone who has implemented, or read about, a smarter way to combine these types of SNA sources.